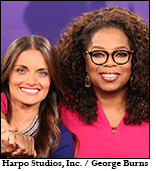 OPRAH: ...Willing to listen and ready for a deeper connection with their children. So that's what we're after, right? A deeper connection.
DR. SHEFALI: Yes, you know, in therapy I have these children coming and sharing from their heart. And I often think to myself, if only their parents could be a fly on the wall to hear and bear witness to what works and what hurts. And so we wanted to offer you an opportunity to see what children feel. And I really applaud the parents who allowed their children to come and expose their hearts because it takes courage and real authenticity of spirit. And this is what these children are gonna show.

...and on Super Soul Sunday 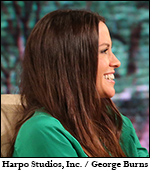 Alanis Morissette spoke with Oprah about the "Trauma of Fame." Watch this video clip (1:12).

OPRAH: You use the term PTSD. What do you mean really by that?
ALANIS: Traumatized because on some level I think becoming famous and wanting fame, there's some trauma.
OPRAH: Did you want it?
ALANIS: Yeah, of course.
OPRAH: Yeah.
ALANIS: I don't think it happens by mistake for anybody frankly.
OPRAH: Yeah.
ALANIS: And then the traumatized person, in this case, me, gets traumatized by the very thing that I thought would be the balm. You know? I thought that all would be helped and healed and soothed by fame.
OPRAH: Because when I get famous -
ALANIS: I will be less lonely and I will be understood and I will be loved and that love will go in and heal any of the broken parts... 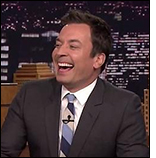 Jimmy Fallon has an excellent idea for a nightly newscast.

The segment features some great NBC news anchors, including Chuck Scarborough. It's hysterical.

1.9 million trees have been planted through reforestation projects in Malawi...More than 10,000 people in Peru have received critical cataract surgeries...Famers in Rwanda and Malawi are increasing their crop yields and income.

Mason, Ohio - Move over sports drinks and soda. A high school in southwestern Ohio has installed an all-carrot vending machine.

The school says students started buying the 50-cent, 3 ounce bags of carrots hours after the vending machine was installed.

Handbags Get Easier to Lug

English women are in luck. According to a survey of women in England, published by The Sun Newspaper (no relation), women's handbags have gotten 50% lighter.

Wherease pocketbooks averaged a shoulder-busting 7.7 pounds in 2006, they now weigh in at a paltry 3.3 pounds.

The reason? Women who used to carry a phone, laptop, camera, and a planner have now eliminated many of those things because of such devices as iPhones and BlackBerrys.

The National PTA and Jamba Juice have collaborated to bring the "Five Fruit Frenzy" smoothie to schools all over the country.

This initiative makes the healthy drink available through the Jamba School Lunch Program.

World Read Aloud Day: Thousands of people joined in a recent celebration of the written and spoken word from at least 15 nations around the globe, launching new LitWorld initiatives in such countries as India, Ghana, Australia and Austria.

From U.S. Naval carriers bringing thousands of books to Africa for students to read – to children organizing their own poetry readings at school – to adults convening at bookshops to read to each other, World Read Aloud Day was a fabulous and fun success. More info.

CHENGDU, CHINA —Tai Shan had been in China only a few hours when he scored what some athletes and stars strive for their entire lives: a corporate sponsorship.

Sichuan Auto Industry Group agreed to pay a million yuan, or about $150,000, to "adopt" Tai Shan for life.

The beloved giant panda, who left Washington D.C's National Zoo, joined China's breeding program and stays under scientists' care at the government-run Bifengxia Panda Base. But the auto company pays for food, medical care and other daily expenses! Continued.

Norway Most Infection-Free Country in World

OSLO, Norway (AP) - Aker University Hospital is a dingy place to heal. The floors are streaked and scratched. A light layer of dust coats the blood pressure monitors. A faint stench of urine and bleach wafts from a pile of soiled bedsheets dropped in a corner.

Look closer, however, at a microscopic level, and this place is pristine. There is no sign of a dangerous and contagious staph infection that killed tens of thousands of patients in the most sophisticated hospitals of Europe, North America and Asia last year, soaring virtually unchecked. Continued.

After he was severely injured on 9/11, city cop Mike Kosowski started playing online poker to escape the pain. All those hours in front of a computer paid off - Kosowski just won $1 million on a TV poker show. "Talk about lucky," said Kosowski, 53, of Staten Island, NY. "I was one of the luckiest guys in the world to survive that day. And now this." Continued.

Two penniless brothers who live in a cave outside Budapest are to inherit most of a reported 4 billion after an astonishing twist in their family fortunes. Continued

VH1 Investigates:
Who are the Greatest Celebrity Do Gooders?

With the help of DoSomething.org, VH1 examines lists of hundreds of philanthropic stars from data compiled by established research institutions, and then narrow the list down to the 20 celebrities that have had the most charitable impact. Check out: 20 Celebrities Gone Good.

Church Members Get Cash to Spend on Others

On a recent Sunday, members of Bay Community Church each were given envelopes stuffed with cash. Inside was $20, $40 or $100, depending on luck of the draw. No ordinary handout, the $50,000 gesture was billed as a "faith stimulus." Church members were told to spend it helping others, a novel approach to religious outreach during tough economic times.

Amid the worst recession in generations, religious organizations are taking a variety of approaches to help struggling families and laid-off workers: Food is being grown on church plots, job and home foreclosure counseling are on the rise, and free haircuts and oil changes are offered.

People in Superhero Outfits Patrol and Protect
Average citizens-turned-crime fighters are regularly suiting up to do good deeds. There may be as many as 200 superheroes keeping watch in communities everywhere.

For example, they have been credited by police for rescuing people after Hurricane Charlie, and two other superheroes in England are being celebrated for defending two police officers under attack.

But these superheroes aren't just taking down people they think are bad guys, they're also doing outreach, such as feeding the homeless. Other superheroes are reaching out to children.

Dexter Darden, a 17-year-old with sickle cell disease and Paul Newman gang member, says that Newman's death surprised many campers, because they were close to him. But he added that other celebrities, such as James Taylor and Julia Roberts, are still volunteering and doing "a great thing."

* * *
Former Astronaut: Not Alone in Universe

Edgar Mitchell, who was part of the 1971 Apollo 14 moon mission, said that extraterrestrial life exists, and that the truth is being concealed by the U.S. and other governments.

"Our destiny, in my opinion, and we might as well get started with it, is [to] become a part of the planetary community... We should be ready to reach out beyond our planet and beyond our solar system to find out what is really going on out there," said Mitchell.

Friedrich Nietzsche said, "Without music, life would be a mistake." Music is a big part of many people's lives. For some, music is life.

But not everyone can have music in their lives, and one man is trying to change that for the deaf community.

* * *
Every Chinese Village To Get Health Clinic

China announced plans to build thousands of new hospitals and put a clinic in every village in the next three years, the first steps in a decade-long reform plan to provide universal health care coverage.

Public health care in China has been under-funded for years, and the high cost and poor availability of services are among the biggest complaints of the Chinese public.

China is pumping in 850 billion yuan ($124 billion) to reform the ailing system in the next three years as part of an ambitious - and still only hazily outlined - plan to provide basic medical coverage and insurance to all of China's 1.3 billion people.

* * *
First-Time Author, 96, Gets Book Published
Proves It's Never Too Late

Brick, NJ. — Harry Bernstein began writing when he was 93 as a way to deal with his memories and the loneliness he felt after his wife of almost seven decades, Ruby, passed away from leukemia in 2002. He spent his nights alone thinking of her, as well as his rough childhood — with vicious anti-Semitism and an alcoholic father.

"I didn't know what the heck to do with myself... You know when you get into your 90s like I am, there's nowhere else to think except the past. There's no future to think about. There's very little present,'" says Bernstein, who gets around his New Jersey house slowly, with the aid of a cane, and is the sole survivor in his family.

"So you think of the past, particularly at nighttime when you're lying in bed. And it all came back. So I began to write, and I was occupied, and it was really the best therapy I could have had."

Bernstein first sent the finished manuscript to New York publishers but, having no luck, he sent it to the London office of Random House. There the book sat for about a year until it came across the desk of editor Kate Elton, who described it as "unputdownable."

The Invisible Wall has already been published in England and Sweden and will also be released in Germany, Italy, Finland and Norway this year. Due to the age at which he wrote the book and his challenging childhood, The Invisible Wall has led to inevitable comparisons with Frank McCourt's memoir, Angela's Ashes, a book about McCourt's Irish upbringing.

His second book, The Dream, is almost finished and centers on the family's move to the United States; Ballantine has already signed on as the American publisher.

Bernstein cranks out his pages on a typewriter in his bedroom, saying that the computer nearby is too complicated for anything more than checking his e-mail. And at his age, he allows himself a certain latitude in the writing process, meaning that instead of worrying about deadlines he just writes until he doesn't feel like writing anymore.

So, all you writers out there — you're not too old to get published. Keep it going!