He has won two EMMY Awards and received 4 EMMY nominations; has received a GRAMMY Award; 10 honorary doctorate degrees; and has also received tons of awards, honors and recognitions. Kids Say The Darndest Things, one of the top 14 bestsellers in American publishing history -- and #1 for two consecutive years -- is one of 23 books Art Linkletter has written. His most recent national bestseller is Old Age Is Not For Sissies.

Art has served on President Nixon's National Advisory Council for Drug Abuse Prevention; on the Presidential Commission to Improve Reading in the U.S., on President Reagan's Commission on Fitness and Physical Education; and he was Ambassador to Australia and named Commissioner General to the 150th Australian Anniversary Celebration.

Equally successful as a businessman, Art has served on many Boards of Directors including MGM, Western Airlines, Kaiser Hospitals, and the French Foundation for Alzheimer's Disease, to name a few. As Chairman of the Board of Linkletter Enterprises, he oversees companies involved in the building and management of public store houses, office buildings, cow-calf operations, real estate development, cattle and sheep stations in Australia, and various oil enterprises around the world.

Lese Dunton: How did you get into interviewing children? How did your show begin? 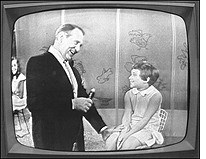 Art Linkletter: The idea of the show began when I was in San Francisco. I was Radio Director of the World's Fair up there, and then became an independent producer. I had some shows on the air. We didn't have tape recorders then, we had big, bulky, heavy machines that recorded by carving wax out of a disk. That's what we had in 1939, 1940, right around there.

I was home and interviewed my son Jack who was five at that time. He's sixty-two now. He was so funny and so cute that I took it down to one of my shows I had, where I interviewed people who were dancing at the St. Francis Hotel on Sunday night. Brought to you by a big jewelry company.

I said, "Now, you'll never guess who we've had dancing here tonight. We've had a world traveler from India, we've had a honeymoon couple, we've had a man who has just done something interesting or other. And listen to this." Then I put on the record and it was my interview with Jack! He said cute things. I asked him:

LD: That's perfect. That sums it up beautifully.

AL: And when that came out, I had a tremendous response from that interview. Lots of mail. In this business, as in your business as you know, the response of your readers -- the response of your listeners in my case -- is a guide to what strikes a hot button. People said it was so wonderful to hear. A little boy talking about himself and what he thinks.

They had kid shows on in those days but they were always kids who were musical geniuses or IQ whizzes. They were doing things that were astounding. This was just a kid talking about what he liked to do. What he worried about, what he dreamed about, what he thought about his parents, and this, that and the other. So when that mail came in I said, "Mmm. That's a good idea. Talking to little kids."

I came to Hollywood later and started the House Party Show on CBS. It was the first big daytime magazine show where we had music and famous guests, participation, stunts, games, everything. Every show had a five minute button on the end of it that involved children that we got from the schools.

I went down and talked to the board of education to see if I could get kids from the grammar schools. They said, "If you hire a teacher -- we'll provide you with a teacher -- we'll go to all the schools and you have nothing to do with who the kids are. None of them are to be told what to say. You have a good reputation so we presume you won't be exploiting them or doing things with the kids." Taking children out of school to a commercial program in Hollywood was not an easy thing to convince a suspicious board of education.

AL: Because everyone is trying to get into the schools one way or the other. So, I got the kids, and of course over 26 years I interviewed 27,000 children, all from 5-10 years old, which kept them under the difficult age of being smart alecs.

LD: What did they teach you?

AL: They taught that their imagination, their trust and belief in me, talking to me, would elicit the kind of things you don't realize goes on in a child's mind until you get to know them. I know all the ways to talk with children and it's not easy.

LD: Yeah, and some open up and some don't.

AL: Some don't. The ones that won't open up you can never ask them a question that they can answer with a yes or a no because that's what you'll get. Then you have to think of another question. I hear people doing it with kids all the time.

LD: That gets them going.

AL: I asked a kid once, a common question, of course, "What do you think you might like to be when you grow up?"
The kid said, "Oh, I'd like to be an airline pilot and fly those big planes to Hawaii."
I said, "Well, let's pretend now that you are a pilot and you're up there in the airplane, flying at about 30,000 feet, and you're halfway over the ocean with 250 people in the airplane. Are you nervous about anything?"
"No. Everything is nice. The sun is shining and the seagulls are flying around."
"But all of a sudden all four of your engines have stopped. What are you going to do?"
"Mr. Linkletter," he says, "Are you sure all four of them have stopped?"
"Yes," I said. "They've stopped and now you're the captain. What do you do?"
"Well, I get on the loudspeaker and tell everybody to fasten their seatbelts."
"Well," I said, "That's a good move. And what would you do?"
"I'd put on my parachute and jump out."

The audience laughed, but I didn't. As the audience laughed he was startled and I saw tears come to his eyes because they were laughing at him. He wasn't trying to be a smart alec. When the audience stopped laughing I said, "Why would you jump out and leave them all behind?" "Oh," he says, "I'm coming back. I'm going for gas!"

AL: So I learned that what makes sense to a child can be the most wonderful material you can have. It's their trust, and the way they get into things.

I have learned to trust the children to come up with the answers. I'll give you a couple of answers, for example, that you just wouldn't think of.
A child asked me, "How old are you, Mr. Linkletter?"
I said, "I'm 45."
He said, "How high to you want to go?" It's just marvelous.

I asked a little girl how she helped her mother.
She said, "I help her make toast for breakfast."
I said, "Tell us what you do."
She said, "Well, you take a piece of bread and you put it in a kind of machine there. Of course, I'm not big enough to flush it."

Those are some of the surprising things that I've learned. I don't make fun of 'em and I don't laugh at them until I find out if they're trying to be funny. That's different. But they're serious. I've learned over the years that I have a natural affinity with children. Wrote a lot of books about it.

AL: I love the unexpectedness of life. To me, every morning is a page of a new book. I don't know what calls are going to be coming in, like this one. Or others. What kind of challenges are going to be presented, what new things I'm going to learn, what new interesting people I'm going to meet. My life is just a constant joy. I never stop anticipating that good things will happen. When bad things happen, I'm sure they will never happen again.

LD: That's such a great attitude.

AL: But I do things to make sure that they don't. I make a good note of why it didn't work or what happened.

LD: What you learned and all.

AL: Yes. My motto is: lifelong learning. And lifelong learning means lifelong curiosity. And with that, a prioritizing of what I'm going to allow myself to be curious enough about to give time to. You have a cornucopia of things and if you just gulp them all down, one after the other, you are going to be satiated before you get to something that might be better.

So, I'm a great one for prioritizing my days. I write my schedules. I have a secretary I can dictate it to, but I love to write so I sit at my typewriter and I have my schedules for lectures and personal appearances running as far as two years ahead. Then my weekly and monthly things are done on a basis of the businesses that I'm in, and the commitments that I have made in the past. Those are constantly changing in where they come out on my list of things to do now.

LD: So you're sort of reassessing and reprioritizing...

AL: Yes, and also that list stares at me when I look at it and reminds me when somebody calls with a very enticing offer to join something or promote something or be a part of something. I look at it and ask myself, "Is it not only what I'm interested in and good, but can I give it what I imply that I will by saying I'll be on it?" In other words, I'm careful about being an honorary member of boards, or honorary chairman of something which I know that I can't be at, or even worse, that I can't give enough time to do it justice. It isn't fair. People will accept less, but I don't accept less.

LD: How do you stay so vibrant and energetic?

AL: Well, in the first place I love what I do, so it's fun. I think that anything that is fun, isn't work. And I don't do anything I don't like. I sit on boards of big corporations as well, but I will no longer sit on the board of any corporation if they put me on the committees that have to do with finance and all the details of accounting and things like that. I don't like that kind of stuff. I'm more interested in people.

LD: You have a natural knack for business, right? It wasn't something that you studied.

AL: I was driven by a high motivating force, and that is: I got into the 95% tax bracket. That will get you interested in money very rapidly. Otherwise, the government takes most of it. I've learned. I have irrevocable trusts set up. I've been in real estate development.

I am a good teacher. I know because I do a lot of teaching now. In fact, I'm a lecturer principally now, maybe 70 lectures a year on all kinds of subjects. So that's really teaching. It's a wonderful mix. It lets me entertain, which I love to do, and have fun and make the audience laugh, but I have the preacher and the teacher inside me that gets into the lecture.

LD: So they can learn while having fun.

AL: Yes. I feel that there's no use being in front of an audience unless what you're doing matters. And mattering is more important the older I get.