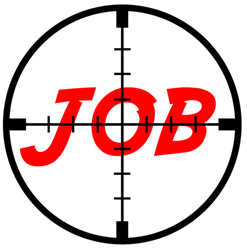 The ranks of the unemployed are inflating like a hot air balloon drifting up through the stratosphere again. Millions scour job boards, submit countless resumes; wait on endless lines or race to fruitless job interviews. The cost of finding a job is even greater than the cost of living with one. You must have a working phone so a prospective employer can reach out to you. Transportation to and from job prospects is hardly free. The internet is the only place to fill out an application, anymore - or register with an agency and your corporate ISP is doing everything they can to keep anyone from surfing without first paying the admission fee.

Searching for a job can feel like slamming your head against the wall and adding to all the stress is a stage of national politics demanding an end to such "entitlements" as extended unemployment benefits (a word rapidly fading from the English language), taxes on the wealthy and a reduction in the food stamp program. How much more will you be expected to live without and more importantly, "Why didn't I land that job?"

Corporations and small businesses are making it harder and harder for an honest, hard working individual to score employment. While support groups are growing like garden weeds to assure the long-term unemployed there is nothing wrong with them, or they shouldn't take it personally, this is not entirely true anymore. There are a handful of things deemed your fault and you probably aren't even aware of it. While many companies complain of unqualified workers, few do anything to offer a paid training position while many take quite a few extra steps to keep you from joining the ranks of the employed.

More and more companies are adding a form to the application process granting them permission to check your credit. Have you checked your credit score lately? You are entitled to one free credit score check every year. Many long-term unemployed feel they don't have to check their credit score. When you lose your income, or face a great reduction in your income, your outflow suddenly dries up. You lose your ability to make those minimum monthly payments. Houses are foreclosed, cars are repo'd and credit cards become the property of collection agencies hounding you into the grave. While one doesn't expect every American should be bailed out like say, every corporation, doing a credit check on a prospective employee in the midst of the greatest recession in at least a century, hardly seems like a proactive step in putting Americans back to work. Want to stimulate local economies? Give a guy a paycheck so he can go out and blow it, like in the good ole days. Want to stop this horrendous practice? Go on a letter writing campaign, call your Congressmen, or women, like a collection agency moron and have them stop this crazy practice. You may be working today, but just how secure is your job?

Do you smoke cigarettes? Are you one of the many addicted consumers who have made stockholders of tobacco companies happy by purchasing a legal product you simply cannot quit? This is even worse than having benefits. While tobacco use may be one of the stupidest indulgences many Americans still take part in, a lengthy discussion with a representative of the Attorney General's Office in Washington D.C. educated me to the fact that while not hiring on the base of tobacco use is 'technically a form of discrimination, tobacco users are not legally recognized as a group in the same way as, say Americans with disabilities are recognized, or African Americans and as such, legally speaking it's not discrimination. Tobacco users would have to petition the court to be legally recognized as a group of Americans before it could be recognized that they are being discriminated against.

Do you smoke? Are you interested in working? You are probably not going to do both in America. Pssst. A smoke-free work place usually means a cheaper health plan. Apparently Health Care Companies tossed a Swedish study showing of the course of a lifetime, tobacco users are less of a burden on health care. When a cigarette smoker gets sick from a lifetime of smoking, it's terminal. He dies! People who live into their 90's are in and out of hospitals at an increasing cost to the health care system.

Companies are also asking for work references for the last three years. Are you a former employee of say, Borders Books and Music or any of the many countless chains that have folded since the dark days of late 2007? It's pointless to give the phone number or address of a dead company so the live one can check your references. Isn't it odd to think a Casey Anthony can be accused of a crime she didn't commit because she is, in fact, innocent until proven guilty, but if you say you worked at such and such a place for the last three years there better be somebody there to prove it!

Background checks are another form prospective employee's must submit too. Have you ever seen a background check on yourself? You may not even have an outstanding parking ticket, but you never know. With identity theft as prevalent as it is today, you could have an outstanding bench warrant in Millville, Kentucky and I'm not even sure such a place exists but I am sure you catch my drift. Some positions require you to take a polygraph. What kind of drugs are you putting into your system and I'm not talking the illegal kind. (I wonder what kind of dire warnings TV commercials would have if say, Heroin were legal.) Use Social Networking sites to track down former supervisors and ask for letters of recommendation.

Most important of all, don't give up because if you do, it's not job-hunting you're giving up on - it's you and regardless of your situation take stock of those around you. I'm sure there's at least one person who won't give up on you. Happy hunting.