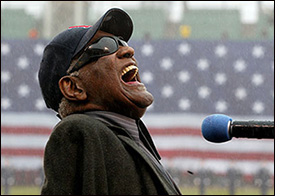 Have you ever been to Georgia? I have. I remember my first trip. It was in the early 80s. It was me, a Jewish kid from Brooklyn and Elaina, a Puerto Rican girl from the old neighborhood. We were driving to Florida from Ohio, in a Mitsubishi with New York plates. I filled up in Tennessee and off we were to Florida. It was raining in Georgia. A sign told us we were entering Dalton and that's about when the windshield wipers of my car stopped working. The lights seemed to dim and the radio died. I pulled off onto the shoulder and called Discover roadside assistance. The tow truck driver, a clean cut 20-year-old, spent 25 minutes under the hood.

"Y'all ride with me," he said. Forty-five minutes later we turned onto a dirt road leading to a house with lots of kids. We pulled into a barn and were met by four other men, all but one of them being the mechanic.

A slim young woman with light blond hair, deep blue eyes and a one-year-old in her arm came into the barn and greeted us. "Y'all come into the house. We got some food and drink." Elaina hurried from the barn disgusted with the eyes passing all over her. I joined her an hour later when the mechanic determined the problem was the alternator. "The nearest alternator we can find for that Japanese car is a dealer in Atlanta. My two older brothers are going to go up tonight. They'll pick it up and be back sometime tomorrow." I asked where the nearest hotel was and the woman of the house said, "You all don't need a hotel. We got us a guest room."

Of course, we didn't sleep a wink. They were killing us - with kindness.

You can only imagine my shock when the following afternoon they drove my car out of the barn and up to the front of the house presenting me a bill for only $179 dollars.

Today, Dalton is part of the 14th Congressional District, with a population of 700,000 people. Less than 10% are African Americans. Hispanics, Asians and Native Americans combine for roughly 5% which means 85% of the remaining population is white. The median annual income is 42k. This is a District where the College graduation rate is under 17% and bleeds red. It's a district where 229,827 votes out of 307,625 voters sent Marjorie Taylor Green to Washington in a landslide victory over Democrat Kevin Van Ausdal.

Redistricting is the sort of dirty tricks manipulation that has led to the election of a Marjorie Green, who calls for the execution of certain democrats as well as her anti-Semitic ravings claiming Jews are setting California's wildfires by firing laser beams from outer space. While I have known a few spaced-out Jews, I've yet to meet a single one who is from outer-space-out. It's just not in our nature. We just want to raise a family, daydream about Rihanna and find a place outside of Brooklyn with good bagels, cream cheese and lox.

None of this, however, is as upsetting as her harassment of parents who lost children in the Sandy Hook School shooting as well as the harassment of Parkland students who survived the Stoneman high school massacre. Both incidents the representative insists, are false flag events that never happened. The participants were paid government actors in a plot to end gun ownership in this country. There are parents still mourning the loss of children and visiting graves with their remains.

Who created Green? The Republican party has only itself to blame. It's obsession of playing Dr. Frankenstein in Georgia by cutting up and disfiguring the Peach Tree State into favorable districts like the 14th (founded in 2011), have created monsters like Green.

So, here's a warning for you. If you're planning a trip through Georgia anytime soon, please, have your alternator checked.

Gimme Shelter
I Remember Your (John Lennon Poem)
Life During War Time
We Now Hold Truth to Be Self-Evident
Social Media
You Can't Always Get Want You Want
Old Friends
Dear Mr. President
Are You an American?