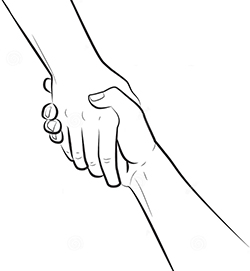 A homeless man shoves an innocent soul in front of an oncoming subway train. It's not the first time it's happened. It won't be the last. How consumed with angst and hatred must one be to commit such a horrific crime. Why is he homeless? He was born like the rest of us. Diapered, potty-trained and sent off to elementary school like you and me. Isn't he the same homeless man who randomly stabbed a 24-year-old UCLA student to death inside the furniture store she was employed in, or, merely the same set of circumstances paving a path of tragedy?

These two men are now one man, the homeless man, guilty of a horrific crime but sharing in something lost at some point of time. He, not they, have a place to sleep, three hot meals to eat and some level of health care. They have the little things in life that really matter.nWas this motive? Doubtful. What set them off? Was it the weather? Was it the on-set of mental disease homelessness breeds or is mental disease the road to homelessness? Is there a drug problem?Alcoholism? Was it something a health care system with its astronomical deductibles to protect monthly premiums companies collect, might have dealt with? Resolved? Prevented the actions leading to the death of two innocent people on twodifferent coasts?

Am I wrong to report the CEO of Humana Health draws an annual salary of $16.7 million dollars? How many monthly premiums does it take to pay an individual $16.7 million dollars, not a dime of which has anything to do with health care, physical or mental. The Seattle Times recently reported the company doles out an additional $323 thousand dollars in commuter costs for said executive. Did you know you could buy a one-bedroom tiny home for $25 thousand dollars? Humana could house 12 homeless persons for the same $323 thousand, tax deductible dollars, it spends on transportation for its CEO.

Sure. We would all love to live like Jeff Bezos and Elon Musk, but let's not forget the little things. Are most of us ever more than a month or three shy of becoming one of the millions of homeless denied those little things by job loss, reasons of health; the crash of the economy; or even a little thing like, say, a pandemic? The house can feel too small and the food? Sometimes it just doesn't seem like it's enough, but those are the little things you'd gladly belly crawl through a septic tank to get back if you ever found yourself amongst the ranks of the homeless. Don't get me wrong. I'm all for free enterprise. I'm just concerned with what it says about us as a society.

Our homeless problem is nothing new and neither are our ways of dealing with it. Some communities answer to this problem is to lock the homeless up for trespassing or loitering since the Supreme Court declared the vagrancy law unconstitutional in 1972. This, of course, solves nothing. It's the livingroom rug lift providing a place for you to sweep the dirt under. The taxpayer foots the bill for a short stay in a county facility where they find other inmates and corrections osfficers, neither of which are trained in social work or psychology.There are no counselors waiting for them when they walk out of the facility and go back to being a community eye-sore?

Do we continue to avoid solutions to the problem? To step-over the dude when he's asleep on the street or simply cross the street when we should look at him and say something like, come with me. You need a hot shower, a good meal, a stiff drink; maybe a change of clothes and a comfortable place to sleep. When was the last time you sat in a living room and watched TV or just had a good laugh with someone? After all, isn't his homelessness in our community a shamefulreflection if not a reminder of our failure to do more for ourselves by doing more for others?

I admit. The solution begs for investment of a costly nature. Community housing with medical staff, both physical and mental. Continued education or job training. We're talking about the kind of investment lacking dividends for the investor in terms of monetary gain, although I was always under the impression working people are earning people and people who earn, spend. People with paychecks put a large portion of their income back into the community.

Are you a subway rider? Or maybe you stand on a corner waiting for a bus to come collect you. Perhaps you shop in a grocery store like the one in Saco, Maine where a woman who identifies as a man pulled out a knife and slashed the throat of a 59-year-old mother leaving five children to join the ranks of motherless children. Groups spend small fortunes on ads decrying abortion, on banners and flags reading Black Lives Matter, blue lives matter, all lives matter. I marvel at the Christmas decorum we dress our homes in. The way we fill our churches in honor of the birth of Christ, maybe a God who walked amongst us. Were he walking amongst us today, legend suggests he wouldn't step over the man sleeping in the street, or cross the street to avoid him all together. He would wake him, extend his hand and say...

Gimme Some Truth
Gimme Shelter
I Remember Your (John Lennon Poem)
Life During War Time
We Now Hold Truth to Be Self-Evident
Social Media
You Can't Always Get Want You Want
Old Friends
Dear Mr. President
Are You an American?