Of Things Seen and Unseen
by Alexie Torres Fleming 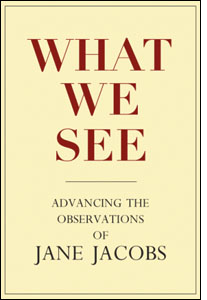 This essay excerpt is from the book, What We See, a collection of stories honoring renowned city and community builder, Jane Jacobs.

Jane Jacobs and I are unlikely friends. She was a white, middle class journalist. I am a Puerto Rican mother and youth minister with no college degree.

Truthfully, I knew little of her until recently, yet as I become familiar with her story, I recognize her as a presence whose ideas and spirit have been with me throughout the past fifteen years of my life.

I have never seen her, yet I am deeply familiar with her essence. She lives in my gut conviction that my community is made up of more than streets, buildings and businesses. It is a brilliant, sacred, living and breathing space whose people are its richest and most powerful resource. I see all of this so clearly now, but it was not always the case for me.

I was born and raised in the Bronx River Public Housing Projects in New York City. I have lived my entire life in the South Bronx, the poorest congressional district in the United States...

...In over fifteen years of struggle we have often been amazed at the visions that were buried within our community and at what we have been able to manifest. Today, with the leadership of our Bronx River residents and many other organizations, partners and technical assistance providers, thousands of people have canoed up and down the Bronx River.

Salt marshes have been restored, wildlife has returned and acres of new parkland and greenways will open soon. The contamination at our local park has been completely remediated with one million dollars of restitution awarded to the Parks Department, and an abandoned cement plant has just opened up as a new waterfront park.

There is indeed a lot to see, and through it all I have tried to be faithful to all that I learned in that hallway in the projects, at my mom's church store, in my parish youth group, and from witnessing my father at work. But if I am lucky enough to get to leave a legacy to my community, I hope that it will be measured less by what is visible and more by what you don't see-an abundance of pride, hope, voice, confidence, love, trust, respect, dignity, and unity. These are the most treasured rewards-the ones I pass on to my own children, even as I continue to develop them within myself.

Not all work today is sacred. Community planning and development has the power to both crush and elevate the human spirit. Jane believed deeply in the power of observation, in what we see. And while I agree with her, I have also found that this work is as much about what we don't see.

Communities are not just streets and buildings: they are the sacred spaces made up of living, breathing people whose hopes and dreams are wrapped up in those same streets and buildings. Planning can elevate or diminish that reality. I have experienced both effects in my life. The most profound and inspiring moments have been about what I don't see with my eyes.

From the book, What We See: Advancing the Observations of Jane Jacobs.